Real estate development is difficult because it requires distinct talents and resources to bring a project vision to fruition. To get started, a developer at the very least must control one of the following:

Often developers (or deal sponsors) may control one of these aspects and decide to work with joint venture partners who provide the other resources for the deal. For example, a real estate developer with a track record of success and demonstrated know-how (knowledge) might identify a landowner with an underutilized property to partner with who provides that critical resource (land) or one who brings more financial resources to the table than the sponsor alone cannot muster (capital).

The value of knowledge can include a vision for a given site and nuanced reading of market dynamics. Things like an insightful grasp of potential demand, market tastes, data and understanding of execution, and experience are necessary to mitigate common project risks proactively). Nothing replaces a good old-fashioned experienced and proven track record of having successfully completed previous real estate development projects when using knowledge as the core asset you bring to the deal. However, you can bolster that experience by leveraging well-organized, structured data and notes collected from previous projects.

In a sense, this is what makes experienced and established developers more effective over time. They have seen patterns, problems, and unexpected issues arise, giving them a broader knowledge bank to make favorable proactive decisions on future projects. Also, access to this type of data and knowledge through proprietary data sources or from previous work experience at larger development firms and professional connections can be helpful.

Raising the Bar on Demonstrating Capabilities

Because real estate development is a capitalistic competition where the fastest, most capable firms usually win out, the bar for demonstrating knowledge increases with time, especially in cities where there is hyper-competition for scarce development sites and market capture.

At some point, even if you have knowledge, capital, and tenants (three of the four primary resources for starting a development project), you will still eventually need to acquire a project site (land). Often this is known as getting site control. Getting site control does not necessarily mean that you have fully acquired a given potential project site, but it does mean that you control the right to acquire the site in a given timeline through option-to-purchase agreements, outright purchase, or partnerships with landholders.

Additionally, because the land is divided into parcels and lots, the most efficient, profitable opportunity for a development project may not simply be acquiring one lot but the configuration of multiple adjacent or nearby parcels that, when combined, unlock tremendous value that was previously unrealized by the lots separate from one another. An example here could be that you might value six small lots with single-family houses at a certain price. But if you could combine them, zoning laws (or adjustments to zoning laws) might allow you to build a taller, more substantial building worth far more than the individual value of the parcels combined.

Another example is the Westside Provisions development by Jamestown west of Midtown in Atlanta. Here, lots historically separated by railroad tracks were connected via a pedestrian footbridge that allowed for a larger, more coherent vision for the mixed-use retail, office, and residential areas than would have otherwise been possible by a site split in half.

For this reason, real estate property assemblage, as combining lots for a project is called, is often a game where the sum of the whole is greater than the parts. And as part of this game, the smartest, most successful developers are often the ones who can assemble property sites and explore the potential development opportunities faster than their competitors such that they feel comfortable expending the resources needed to get site control and acquire a given site.

Every developer is looking to assemble the choicest, most valuable sites to maximize their potential returns. But what is a choice site also depends on a vision for the location and market demand for a given use in that location. Developers with speedy access to accurate information and data to drive underwriting assumptions can more quickly determine if a given combination of lots makes sense to assemble and acquire.

Even more importantly, those developers can pay more for the site in a competitive situation where multiple buyers might be bidding for a given site. They can bid higher because they have greater confidence in their underwriting assumptions and have likely been able to explore a greater number of potential project scenarios, uses, and building designs. In short, they understand what the highest and best use for the site is, and as a consequence, they can afford to pay more for the site given the higher profits they can derive if the project is completed successfully.

In the past, iterating through different project scenarios for a given project site was a real slog—multiple versions of spreadsheets needed to be created (causing version control challenges). You need to make the correct assumptions about potential project costs for different types of uses, designs, and other circumstances and corresponding revenue assumptions (how much rent or sales you can make). Furthermore, pulling sources for assumptions involved digging through old spreadsheets by different team members (if you were fortunate enough to have saved these files!), deciphering the information in these documents, and then plugging them into a spreadsheet where you might have forgotten a few months or years down the road where those assumptions came from.

Today, tools like Northspyre Plan allow teams to take these dated processes and map them seamlessly into intuitive apps that make it easy to tap into automatically indexed databases of historical cost and project data. Marrying clear access to data with automation tools that eliminate data entry for incoming invoices allows the new generation of developers to focus on iterating as quickly as possible to determine the highest and best use for a given site, and then focus on getting site control before a competitor acquires the site or puts in a bid increasing the underlying cost basis to make a deal work. The old methods were slow. In real estate development, speed is king. 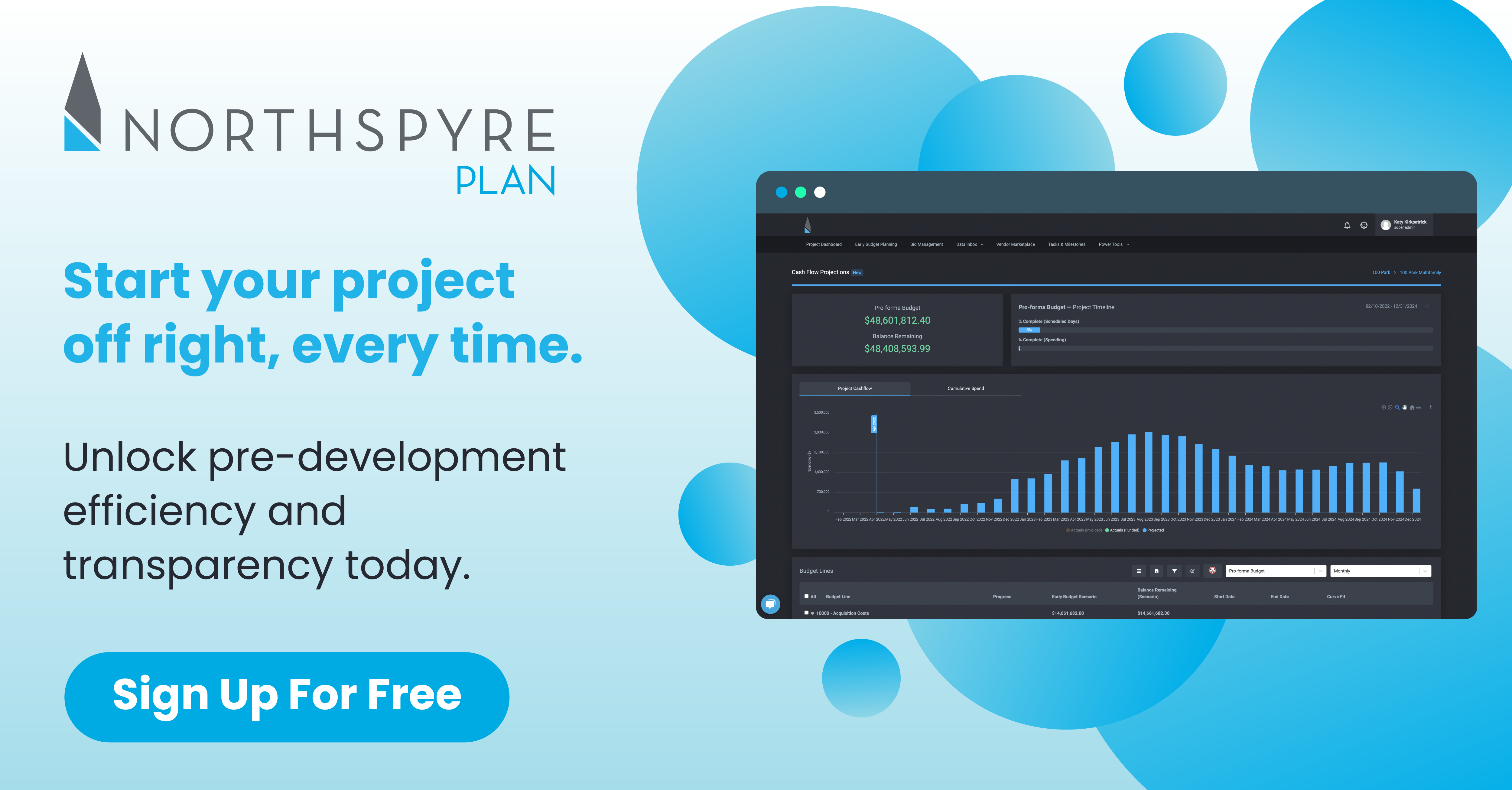 How to Reduce Project Costs During Early Pre-Development (PART 3)

This is a three-part series that explores how developers are de-risking projects and reducing project cost overruns by... Continue Reading
June 15, 2022
Real Estate Development

The way we work is changing. And as a result, the real estate development landscape is changing too. Continue Reading
September 28, 2022
Real Estate Development

How Does Your Real Estate Sustainable Development Policy Stack Up?

With a  recession looming and a  labor shortage disrupting the industry, sustainable development policies aren’t top of... Continue Reading