Why Industrial Real Estate Development is Getting More Difficult

The U.S. industrial real estate market entered a boom period due to the  rapid expansion of e-commerce amid the onset of the coronavirus pandemic. Leading providers like Amazon  snapped up logistics buildings to quickly meet an unprecedented surge in demand. But for the first time in two years, the segment has begun to stagnate nationwide.

Here’s a closer look at the property type’s staggering expansion during the pandemic, its recent slowdown, and the challenges industrial real estate developers should expect in 2023.

After experiencing massive growth during the first years of COVID-19, an industrial real estate market correction was inevitable.

The segment caught fire in 2020 as millions of consumers began working from home per self-quarantine mandates. The paradigm shift prompted the public to embrace e-commerce, driving online sales to a  record $791.7 billion. The trend intensified as Washington issued stimulus checks to support the economy, and Americans poured some of that money into new household goods and electronics. By 2021, a National Retail Federation survey found that 68% of consumers named online purchasing as their  preferred shopping method.

Amazon, America’s largest e-commerce company, adjusted to the changes in the landscape by doubling the size of its  fulfillment network. The corporation spent  $151.8 billion to greatly expand its headcount and add  hundreds of new logistics buildings to its footprint in 2021. The e-commerce giant’s massive expenditures helped drive industrial property revenue to  $166.1 billion, a 56% year-over-year increase. The segment’s growth was so robust it outperformed every other commercial real estate asset class aside from multi-family.

But the e-commerce boom that drove the industrial market’s growth is seemingly over. With a recession potentially on the horizon and no federal stimulus checks distributed in 2022, online retail activity has cooled off considerably this year. And logistics building tenants and owners are feeling the impact.

Due to softening sales, Amazon slowed down its hiring and moved to sublease  10 million square feet of warehouse space this spring. MWPVL International Inc. reported that the corporation has delayed and canceled the opening of 80 buildings. America’s brick-and-mortar retailers aren’t interested in  filling the gap in the warehouse market left by the corporation. Walmart, Target, and Nike are aggressively trying to  shed excess stock due to inflation and an economic anxiety-fueled downturn in consumer purchasing.

The commercial real estate services company reported that the average nationwide warehouse vacancy rate hit 3.2% in the third quarter, up 0.2% from the second quarter. The firm also told the Wall Street Journal companies leased 163.1 million square feet of new logistics space in the same period, down from 207.4 million in Q2.

Moreover, the International Monetary Fund reported that  industrial property values declined globally in 2022 from their post-pandemic peak. Similarly, Green Street, a commercial real estate research group, found that the asset class lost 19% of its value since the first quarter.

Prologis, the world’s largest logistics building owner, has  changed its roadmap in response to the shifting economic conditions. The corporation intends to spend $4.2 billion to $4.6 billion on new development starts in 2022, down from the $4.2 billion to $5 billion range it announced in the second quarter. Prologis CFO Tim Arndt told investors demand for industrial space is still strong, an assertion supported by the country’s low vacancy rate. In 2019, America’s warehouse vacancy rate stood at 5%, 1.8% higher than it is now.

Brian Strohl, Link Logistics’ senior vice president of development, touched on the complexity of creating infill locations at the regional level. Although consumers grew to love  rapid home delivery during the pandemic, cities and towns oppose local logistics building development. The executive explained he'd encountered resistance even in communities that appreciate the economic benefits of being home to a new e-commerce facility. “There are a lot of  NIMBYs out there with good reason,” said Storhl.

Hillwood President Tal Hicks added, “You have to go in with the mindset that you are going to have to sacrifice something to get what you want.”

Not In My Backyard advocates have been a major problem for the sector long before the industrial real estate market took off. Forbes reported community groups and individuals postponed or unraveled over $1 trillion in real estate development deals between 2005 and 2015. Based on Storhl and Hicks’ comments, NIMBYs will continue to be a big logistics development obstacle next year.

In addition to site selection challenges, warehouse developers will have to deal with a significant  entitlement and construction backlog in 2023. In July, Newmark Group stated those phases of development took five times longer than before the COVID-19 outbreak. The research organization found understaffed local governments and a 120% increase in tenant demand slowed down the pipeline. Lisa DeKnight, Newark’s national industrial research director, told  Commercial Observer that rising raw materials costs,  supply chain problems, and  labor shortages have curtailed project deliveries.

The recent dip in industrial real estate demand could relieve the development logjam. But CBRE estimates construction costs will rise by 14.1% annually by the end of 2022 and grow by another  2 to 4% in 2023. That means even if it becomes easier to build new warehouses next year, it’ll still become more expensive.

Hicks told CREate 360 attendees his firm isn’t pursuing any speculative logistics projects because of uncertainty about interest and capitalization rates. “Developers will need a higher  yield on cost.”

Ultimately, the consumer purchasing preference shift sparked by the pandemic will sustain the long-term growth of online shopping. Statista’s researchers anticipate retail e-commerce revenue will jump from $875.2 billion in 2022 to $1.01 trillion in 2023. While smaller than the annual sales increases between 2019 and 2021, the segment’s predicted expansion will keep demand for warehouse space high. But until the U.S. economy becomes more stable, real developers might want to pursue less risky projects with other property types.

For example, Cushman & Wakefield stated that Life Sciences “is well positioned to weather the uncertainty brought on by periods of economic slowdown” in an  October report.

Preparing your firms for an economic downturn? Download our  4 Recession-Proof Asset Classes whitepaper to find out what makes the segment so resilient. 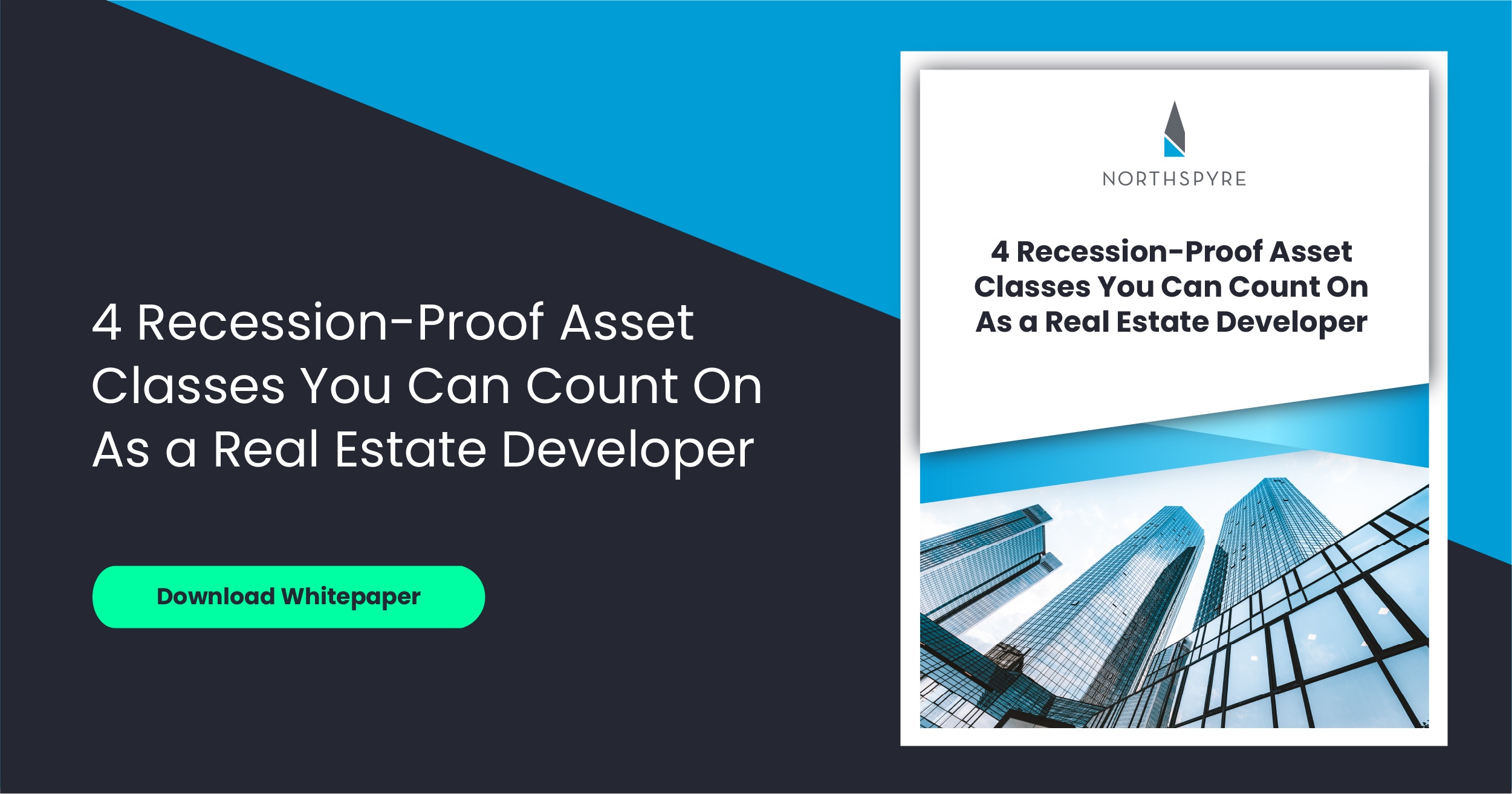 How to Combat the Affordable Housing Development Cost Crisis

With a supply chain already in flux due to the pandemic now further exacerbated by the war in Ukraine and rising... Continue Reading
June 23, 2022
News

What the Housing Market Slowdown Means for Real Estate Developers

At the start of this year, the American residential real estate market was red hot, with home pieces exceeding $400,000... Continue Reading